I hope this finds you enjoying the blessings of this Advent season. Sometimes it’s difficult to take time to “be still and know that I AM God” during Advent. The world around us seems to be dragging Christmas onto our calendars before Halloween. However, taking time during Advent to prepare our hearts and minds for the peace, hope, joy and love of Christmas enables us to be ready to receive the holy gift of the Christ child, which is without a doubt the only gift we truly need!

While we are preparing to welcome the Prince of Peace, not everyone is fortunate enough to experience the holidays within safe, loving families. Domestic violence does not stop because of the holidays and the abuse and violence experienced by victims may be exacerbated (although not caused) by the financial stress and alcohol consumption that often accompany them. Victims and survivors of domestic violence may experience additional stress and unique challenges over the holiday season and may turn to advocates at domestic violence organizations or to other resources in the community – such as the local church – for needed support.

The Episcopal Church understands the importance of not only being prepared to offer support to victims of domestic violence but also being able to recognize the signs of abuse in the members of our communities who may be too afraid to seek help on their own.

Resolution D031 from the 79th General Convention speaks to our role in recognizing and ending domestic violence in our congregations:

D031: Recognizing and Ending Domestic Violence in Our Congregations

Resolved, That the 79th General Convention of The Episcopal Church continue to speak out clearly against all forms of domestic violence as it has done in the past; and be it further

Resolved, That the 79th General Convention encourages Episcopal clergy and congregations to educate themselves on the widespread problem that domestic violence is in their churches, neighborhoods and beyond; and be it further

Resolved, That the 79th General Convention urge all Episcopal Bishops and other clergy and lay leadership to familiarize themselves with the international and multi-lingual resources provided by the National Coalition Against Domestic Violence, White Ribbon, and other local resources, as well as existing trainings developed for domestic violence prevention, and create procedures for supporting domestic violence survivors in their dioceses and congregations; and be it further

EXPLANATION (Not included the final resolution):  Domestic violence affects one in every four women. On average, nearly twenty people per minute are physically assaulted by their partners in the United States. The statistics are staggering. It is doubtful that anyone can say that domestic violence has never affected them or a family member or friend. It would be statistically impossible to also say it has never affected every Episcopal Congregation at some point.

The mission of the National Coalition Against Domestic Violence is to lead, mobilize and raise voices to support efforts that demand a change of conditions that lead to domestic violence such as patriarchy, privilege, racism, sexism, and classism. This organization is dedicated to supporting survivors, holding offenders accountable, and supporting advocates. Their website contains valuable information for those who want to offer support and advocate for victims. This site also explains some of the signs of domestic violence to help us learn to more easily identify someone in need of help.

Also included on the website for the National Coalition Against Domestic Violence are links to more regional resources including those in Michigan. The Michigan Coalition also has a Facebook page which might be easier for a victim to browse without raising suspicion. 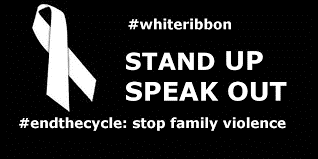 White Ribbon is the world’s largest movement of men and boys working to end violence against women and girls. This organization seeks to promote gender equity, healthy relationships and a new vision of masculinity. Since its inception in Toronto in 1991, The White Ribbon Campaign has spread to over 60 countries around the world. White Ribbon asks men to wear white ribbons as a sign of their pledge to never commit, condone or remain silent about violence against women and girls. Their mission is to engage men and boys in the prevention of gender-based violence by promoting equity and transforming social norms, challenging and supporting men and boys to realize their potential to be part of the solution in ending all forms of gender-based violence.

The National Domestic Violence Hotline provides anonymous, confidential help for victims 24/7 at 1-800-799-7233 (SAFE) or 1-800-787-3224 (TTY). Their website is a great resource for all victims of domestic violence and even includes tips on how to quickly close the site if the situation should become unsafe while the victim is browsing.

In addition to these national and regional resources, many communities also have local domestic violence shelters available for people who need to escape violent relationships.  Displaying contact information for local resources where victims can easily see it may encourage someone to get the help they need.

Educating ourselves and our congregations about the signs of domestic violence and the resources available for victims will help bring us one step closer to all God’s children being able to experience the peace that Jesus promises.

God our redeemer and sustainer, we pray for the survivors of violence, abuse and neglect. Be with them in confusion and pain. Give your power to the powerless, your fullness to the empty of spirit. Heal their wounds, free them from fear and restore them to true health. Strengthen them to face the future with faith in you. We ask this through Jesus your Son, who was himself a victim of abuse and yet in his resurrection, triumphed over the oppression.

Likewise, God of justice, judge of all the earth, we bring before you those who abuse and mistreat others. Turn the hearts of the exploiters from the way of evil. Open their eyes to the truth of their conduct and fill them with hatred for the damage they do. And so by your Spirit bring them to true repentance and amendment of their lives.

And now, may your Spirit draw us together, both in our church family, and in the community. May we face our mistakes with complete honesty. But preserve us from unhelpful speculation and gossip. Help us reach out, care for the hurting, and support each other. Strengthen us with the gospel of your grace, for Jesus’ Christ’s sake.  Amen. (Matthias Media)