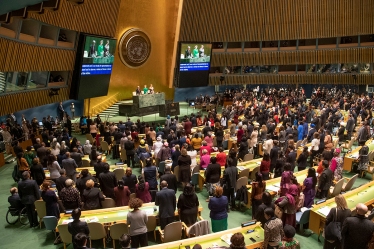 As most of you probably know, besides being a priest on the Ministry Support Team of St Michael and All Angels in Cambridge Junction, I work as the residence director of a men’s dorm at Hillsdale College. This week I was saddened to read a text sent out to the dorm by one of my freshmen inviting the guys to come listen to the Democratic Candidates’ Presidential debate on Thursday evening. Normally, I would be pleased that these students want to be informed but the words of the text read: “Come to watch God send confusion into the camps of our enemies.” The student sending the text is young and, hopefully, will be open to listening to the viewpoints of others as he matures but, at the moment I read it, I was very annoyed. Where was respect and humility in these words? Because I share a dorm with this young man, I know that he does have admirable qualities so I can balance these harsh words with what I see day-to-day in his behavior and comments around our college home. What troubles me most is that I think his words reflect quite accurately the divisiveness we are experiencing in our country now. It has become an “us vs. them” battle on almost every front. I consider myself a proud American yet I am a follower of Jesus first and foremost. I try hard to take the words of our Baptismal covenant seriously:

I may disagree with the opinions of others but they are not my enemies. I am called to respect their dignity and love them as I love myself. Understanding and kindness are good first steps in moving beyond the disunity we are experiencing right now in our country.

That’s a rather long intro to get where I want to be going this week so thank you for bearing with me. We have a resolution from General Convention 2018 that expresses our desire as a Church to work in cooperation with others for the benefit of all people, especially those experiencing the lack of privilege that many of us take for granted:

A039: Affirm the Work of The Episcopal Church at the United Nations

Resolved, That the 79th General Convention and the Domestic and Foreign Missionary Society of the Episcopal Church rejoice together in being granted Economic and Social Council consultative status at the United Nations, which status provides the opportunity for representatives and delegates of The Episcopal Church to provide input to decision and policy makers of the United Nations, such input provided being in accordance with resolutions passed by the General Convention; and be it further

Resolved, That the 79th General Convention encourage Executive Council and its committees be in closer dialogue with the official representatives of The Episcopal Church to the United Nations; and be it further

Resolved, That the 79th General Convention encourage the Global Partnerships team and the Church’s official representatives to the United Nations to provide access to educational materials, resources, and information in English, French, and Spanish regarding opportunities presented by this status on The Episcopal Church website, Episcopal News Service, and at diocesan conventions; and be it further

Resolved, That the 79th General Convention encourage all Episcopalians to avail themselves of the resources and opportunities provided by the Global Partnerships team and the Church’s official representatives to the United Nations and encourage those who participate as delegates representing The Episcopal Church to share their experiences as broadly as possible in their parishes, dioceses, and beyond with the support of the Domestic and Foreign Mission Society; and be it further

As you can see, this resolution is all about working together for the good of all. The Episcopal Church (TEC) website explains this partnership this way:

Episcopalians have been engaging with the United Nations (UN) since its inception in 1945. They participate in many different ways: as UN staff, as representatives of member states, as representatives of civil society organizations, or simply by learning from the UN or attending UN events. In their local churches, dioceses and communities, Episcopalians engage with the UN by learning about issues being discussed at the UN, by contributing their expertise to the UN when possible, and by creating an understanding of the link between our local concerns and the global community of which we are all a vital part.

For more detailed stories of TEC’s work with the UN, check out the TEC site which has links for six reports on initiatives in which the Church has participated.

Our own diocese has also participated in this important relationship sending two representatives to the United Nations Commission on the Status of Women (CSW): Rebecca Rosen (2017) and Victoria Bell (2016). The CSW describes its purpose:

The Commission on the Status of Women (CSW) is the principal global intergovernmental body exclusively dedicated to the promotion of gender equality and the empowerment of women. A functional commission of the Economic and Social Council (ECOSOC), it was established by ECOSOC resolution 11(II) of 21 June 1946.

The CSW is instrumental in promoting women’s rights, documenting the reality of women’s lives throughout the world, and shaping global standards on gender equality and the empowerment of women.

In 1996, ECOSOC in resolution 1996/6 (see p. 20) expanded the Commission’s mandate and decided that it should take a leading role in monitoring and reviewing progress and problems in the implementation of the Beijing Declaration and Platform for Action, and in mainstreaming a gender perspective in UN activities.

During the Commission’s annual two-week session, representatives of UN Member States, civil society organizations and UN entities gather at UN headquarters in New York. They discuss progress and gaps in the implementation of the 1995 Beijing Declaration and Platform for Action, the key global policy document on gender equality, and the 23rd special session of the General Assembly held in 2000 (Beijing+5), as well as emerging issues that affect gender equality and the empowerment of women. Member States agree on further actions to accelerate progress and promote women’s enjoyment of their rights in political, economic, and social fields. The outcomes and recommendations of each session are forwarded to ECOSOC for follow-up.

Clearly, collaboration and partnership can take us much further than divisiveness and opposition. As an example, in March 2019, Presiding Bishop Michael Curry sent a statement to the 63rd Session of the United Nations Commission on the Status of Women:

My name is the Most Reverend Michael Bruce Curry and I am the Presiding Bishop and Primate of The Episcopal Church, known at the United Nations as the “Domestic and Foreign Missionary Society of the Protestant Episcopal Church in the United States of America.” We are a Christian denomination of two million members in more than 15 countries and a province of the Anglican Communion. I submit this statement as our Church’s spokesperson charged by our Church’s Canons and Constitutions to “speak God’s words to the Church and to the world, as the representative of this Church and its episcopate in its corporate capacity”.

Our scriptures, Jesus’ Way of Love and our Baptismal Covenant call us to love one another as Christ has loved us, and to seek and serve Christ in all persons, regardless of gender.

These Christian values are the reason our Church has officially affirmed United Nations international agreements and conventions calling for just and equal treatment of women and girls. The Episcopal Church also supports women and girls through its mission, programs, resolutions of its governing body, General Convention, and advocacy. Episcopal congregations, dioceses, schools, agencies, networks and programs provide and deliver social protection and public services resources to women and girls.

This year’s priority theme stresses that women and girls need adequate social protections and public services, coupled by sustainable gender-responsive infrastructure and development, to realize fully their empowerment. Still, many women and girls find that gender-specific gaps, inequalities or discrimination impede their progress.

Bishop Curry’s statement asked the CSW to address these impediments:

You can find the Bishop’s rationale and suggestions in his full statement to CSW.

Resolution A039 asks each of us to avail ourselves of resources and opportunities that we might join in this important partnership. If you have questions or an interest in learning more, you can contact the Episcopal Church Representative to the United Nations, Ms. Lynnaia Main at (212) 716-6128. Let’s work together on this that we might be voices bringing a vision of collaboration and partnership to those we need a new perspective.

O God, you have made of one blood all the peoples of the
earth, and sent your blessed Son to preach peace to those
who are far off and to those who are near: Grant that people
everywhere may seek after you and find you; bring the
nations into your fold; pour out your Spirit upon all flesh;
and hasten the coming of your kingdom; through Jesus
Christ our Lord.  Amen.