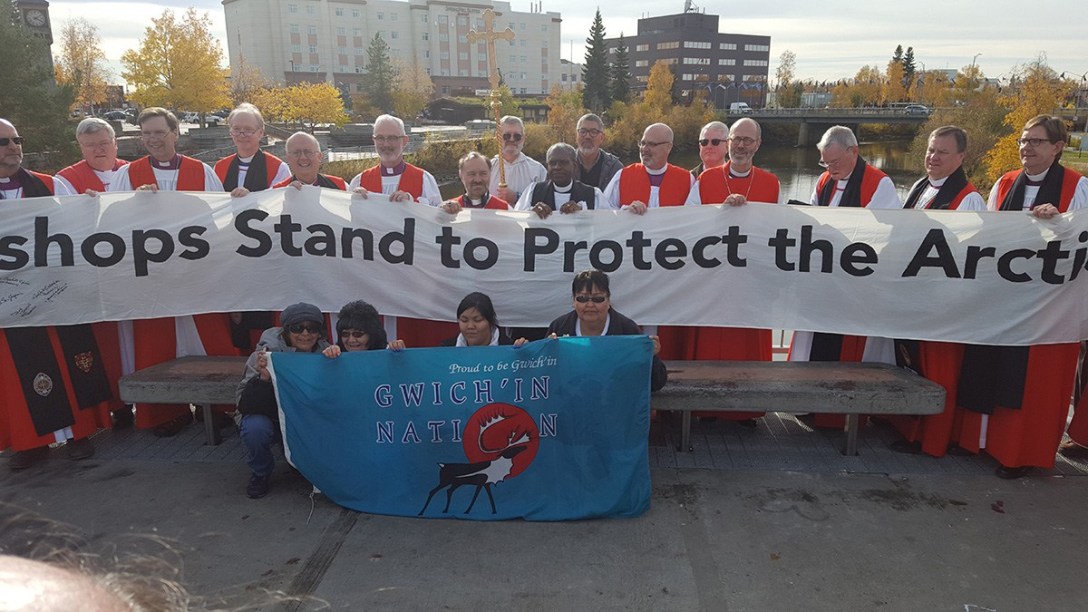 A trip to Alaska to see the glaciers has been on my “bucket list” for a long time (I know; with climate change taking its toll on the glaciers, I’d better hurry!) so I have been following the House of Bishop’s visit to Alaska with vicarious pleasure. Last week I wrote a bit about the bishops’ experience visiting various communities around the state. They began by listening to the stories of the residents before offering a blessing of the land in each place. Such a good model for all of us as we attempt to minister in our communities! Before returning home, the bishops issued an important Word to the Church –

A Word to the Church from The Episcopal Church’s House of Bishops
Gathered in Fairbanks, Alaska, September 21-26, 2017

The bishops of The Episcopal Church came to Alaska to listen to the earth and its peoples as an act of prayer, solidarity and witness. We came because:

What does listening to the earth and its people mean? For us bishops, it meant:
• Getting out and walking the land, standing beside the rivers, sitting beside people whose livelihood depends on that land. We had to slow down and live at the pace of the stories we heard. We had to trust that listening is prayer.
• Recognizing that struggles for justice are connected. Racism, the economy, violence of every kind, and the environment are interrelated. We have seen this reality not only in the Arctic, but also at Standing Rock in the Dakotas, in the recent hurricanes, in Flint, Michigan, Charlottesville, Virginia, and in the violence perpetuated against people of color and vulnerable populations anywhere.• Understanding that listening is deeply connected to healing. In many healing stories in the gospels, Jesus asked, “What do you want me to do for you?” That is, he listened first and then acted.

What did we hear?
• “The weather is really different today,” one leader told us. “Now spring comes earlier, and fall lasts longer. This is threatening our lives because the permafrost is melting and destabilizing the rivers. We depend on the rivers.”
• The land in the Arctic National Wildlife Refuge where the caribou birth their calves is called the “sacred place where life begins,” so sacred the Gwich’in People do not set foot there. “Drilling here,” people said, “is like digging beneath the National Cathedral.”
• After shopping together, a native Episcopalian told one of us how hard it is to even secure food. “We can’t get good food here. We have to drive to Fairbanks. It is a two-hour trip each way.”

What we bishops saw and heard in Alaska is dramatic, but it is not unique. Stories like these can be heard in each of the nations where The Episcopal Church is present. They can be heard in our own communities. We invite you to join us, your bishops, and those people already engaged in this work, in taking time to listen to people in your dioceses and neighborhoods. Look for the connections among race, violence of every kind, economic disparity, and the environment. Then, after reflecting in prayer and engaging with scripture, partner with people in common commitment to the healing of God’s world.

God calls us to listen to each other with increased attention. It is only with unstopped ears and open eyes that our hearts and lives will be changed. It is through the reconciling love of God in Jesus and the power of the Holy Spirit that we and the earth itself will be healed.

We know there are needs in all our communities and we must listen to the stories of our neighbors to determine how best to work together to meet them. Sometimes, we even have the privilege of trying to prevent disasters from happening by taking action before the needs arise. Last spring, the four Episcopal dioceses in Michigan appealed to our governor to take immediate action on the Enbridge Line 5 pipeline. Joyce Munro, a member of the Resolution Review Committee of Diocesan Council shared this timely update: 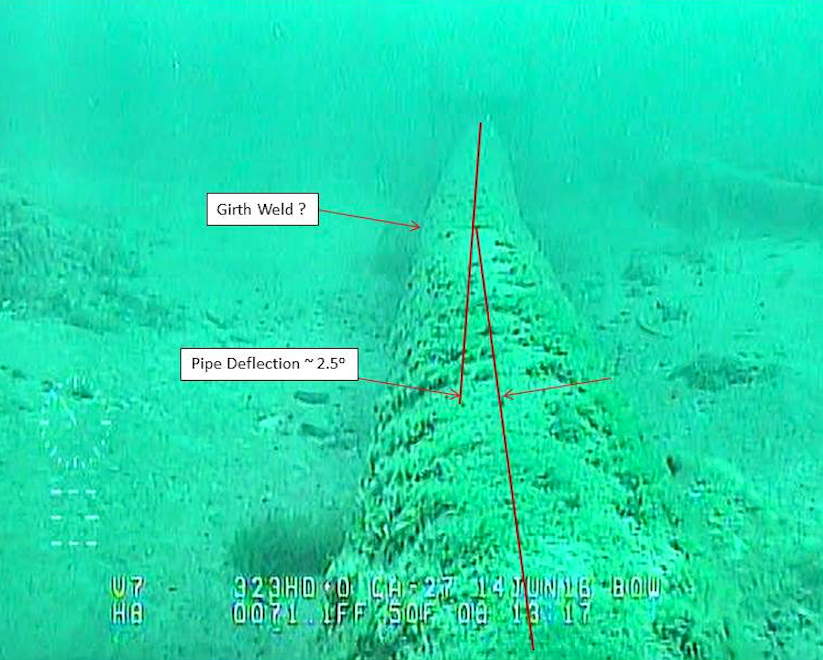 Enbridge Line 5 consists of two parallel pipelines constructed in 1953 on the lakebed in the Straits of Mackinac to carry liquefied natural gas and crude oil.

The huge July 2010 oil spill from Enbridge’s Line 6B into a tributary of the Kalamazoo River awakened public attention to the risks of an oil spill into the Straits of Mackinac.  In 2016, the Michigan Petroleum Safety Advisory Board (made up of members of the Department of Environmental Quality, the Department of Natural Resources, the Michigan Agency for Energy, and the Attorney General’s office) hired Dynamic Risk Assessment Systems of Calgary, Alberta, to analyze the risks of oil and gas spills from Line 5. The study was paid for by Enbridge Energy. Dynamic Risk delivered its report to the Petroleum Advisory Board in late June 2017 (a copy of the report is available on the Board’s website here)

Two major problems quickly emerged: (1) Dynamic Risk Assessment Systems did not provide an analysis of the effects of a worst-case scenario oil spill at the Straits, which the contract required it to do, and (2) one of the authors of the report was working for Enbridge Energy at the time, a clear conflict of interest. The report overall underplayed the risks of oil spills into Lakes Michigan and Huron at the Straits.

The Board has demanded that Dynamic Risk make major revisions to the report. Public comments filed by the Board on 8/4/17  listed the flaws in the report. A news report on the Board’s comments can be found here. Meanwhile, no action is being taken to protect the environment from spills while a decision on Line 5 is delayed by further studies.

An August 2017 inspection of the coating of the pipes in Line 5 shows that the patches of bare metal (delamination of the coating from the pipes) are larger and more numerous than Enbridge admitted to earlier in the year. In addition, the state has discovered that Enbridge has failed properly to support long spans of the lines in violation of the original easement granted in 1953. Some sections of the pipelines are bent and deformed (“ovalized”).

Enbridge continues to claim that the pipeline will continue to operate safely indefinitely, contrary to the findings of recent inspections. It may be that the company believes that cleaning up catastrophic oil spills is just the cost of doing business. If the cost becomes too high, the company can seek relief in bankruptcy proceedings. We cannot allow Line 5 to continue to operate.

In March of 2017 the Episcopal Diocese of Michigan issued a resolution that “our brothers and sisters in faith request that Governor Snyder utilize the State’s authority by acting immediately to cause Line 5 to be restricted to not more than 300,000 bbl per day and its cargo be limited to non-oil products until the recommendations of the Michigan Petroleum Pipeline Task Force have been satisfied and an independent panel of pipeline experts has verified that Line 5 is safe.”

The anticipated “independent panel of pipeline of experts” has demonstrated clear conflicts of interest. The Task Force has demanded further study of the problem, delaying action again. According to MLive, Governor Snyder has stated that he is “gravely concerned” about the coating delamination and has asked the Task Force to “accelerate an aggressive review of Enbridge operations and maintenance procedures throughout the state.” Michigan Attorney General Bill Schuette, who is now running for Governor, has said that Line 5 should be shut down, but he has never said when it should be shut down. The Task Force, of which the AG’s office is a part, has sent a letter to Enbridge asking that it inspect coating loss at all pipeline anchors.

Water quality advocates like FLOW (For Love of Water) demand that Line 5 be decommissioned. They ask that those supporting decommission text “Shut Down” to 1-231-480-4112.

Consider contacting Governor Snyder, AG Schuette, and the Pipeline Safety Task Force to urge them to shut down Line 5 to protect the Great Lakes, our drinking water, and the complex web of life supported by the Great Lakes.

“The earth is the Lord’s and all that is in it, the world, and those who live in it; for he has founded it on the seas, and established it on the rivers” (Psalm 24:1-2)

Episcopal News Service prepared a good overview of the bishops’ visit to Alaska that you can find here.

This is our opportunity to listen to the land and water before a disaster occurs that would harm many people, wildlife and our Great Lakes and to do this, we must speak out. Every time a new study has been completed on Line 5, the situation appears worse than we recognized before. We may not have the luxury of time to do more research.  It’s time to shut down Line 5. Please join me in calling the appropriate offices that Joyce mentioned above.  You can reach Governor Snyder’s office at 517-373-3400 and online here and the Attorney General Bill Schuette at 517-373-1110 or by emailing him at miag@michigan.gov.

You can also find some good resources for becoming informed about the needs of our planet and how you might help at The Episcopal Church page “Stewardship of Creation.”

I am an autumn person. I love the cooler temperatures, the changing color of the leaves, the smell of fireplaces burning and all things pumpkin. I often go out of my way to watch the changing landscape of the farm fields around me as the seasons change.  Our Earth is truly amazing and beautiful. We only get one shot at this; there’s no real “plan B” planet home for us. Let’s take our cue from the fine work the bishops did and protect this land and water we have.

A Prayer for Our Time and for the Earth

Dear God, Creator of the earth, this sacred home we share;
Give us new eyes to see the beauty all around and to protect the wonders of creation.
Give us new arms to embrace the strangers among us and to know them as family.
Give us new ears to hear and understand those who live off the land
and to hear and understand those who extract its resources.
Give us new hearts to recognize the brokenness in our communities
and to heal the wounds we have inflicted.
Give us new hands to serve the earth and its people
and to shape beloved community.
For you are the One who seeks the lost,
binds our wounds and sets us free,
and it is in the name of Jesus the Christ we pray.
Amen.