Some of my favorite memories from my childhood center on my experiences in Scouting.  I loved being part of the group and relished working on badges together.  I was proud of my uniform and the values it represented.  And I loved the enthusiastic volunteers who served as leaders for our troop.  I believe I developed some of my leadership and service skills through their modeling and example.  Well, there must be many others like me who found their scouting experiences to be worthwhile because we passed a resolution at General Convention last summer congratulating the Boy Scouts of America (BSA) for 100 years of work with American youth:

Resolved, That the 78th General Convention congratulate the Boy Scouts of America (BSA) for over 100 years of fine work with American youth, teaching leadership, cooperation, teamwork, and ethics in a non-sectarian program emphasizing outdoor and life skills, a program which has reached millions of boys; and be it further

Resolved, That the 78th General Convention commend the BSA for its recent change to a non-discriminatory membership policy, welcoming all youth to be scouts, irrespective of their sexual orientation, a change consistent with Resolution C031 adopted by the 73rd General Convention; and be it further

Resolved, That the 78th General Convention recommend that vestries and clergy in charge of congregations sponsor or continue to sponsor scouting units (packs, troops, posts and crews), especially those units recently displaced by decisions from other denominations to cease sponsoring scouting units as a consequence of the BSA’s recent change to a non­discriminatory membership policy concerning sexual orientation; and be it further

Resolved, That the 78th General Convention urge that parishes strongly consider, at the time they charter or renew the registration of their Boy Scout unit, communicating to the Boy Scout Council and to the public that The Episcopal Church strongly disagrees with the BSA’s policy of discriminating against qualified adult leaders based on sexual orientation; and be it further

Resolved, That the 78th General Convention encourage qualified adults to volunteer as leaders, and otherwise to support the BSA work with youth in their communities; and engage in educational programs within their churches to inform members and others about these nondiscrimination issues; and be it further

Resolved, That insofar as the 77th General Convention affirmed our full inclusion, support, and love for our brothers and sisters in the transgender community at all levels of church leadership and membership, the Episcopal Church is eager to work with the BSA in hopes of making the great benefits and life-long lessons of scouting available to all; and be it further

Resolved, That the 78th General Convention directs that the Office of General Convention send a copy of this resolution to the BSA’s National Office and the National Executive Board of the Boys Scouts, and to seek discussions to alter its membership policy for adult leaders which discriminates against qualified adults based on sexual orientation or gender identity/expression. 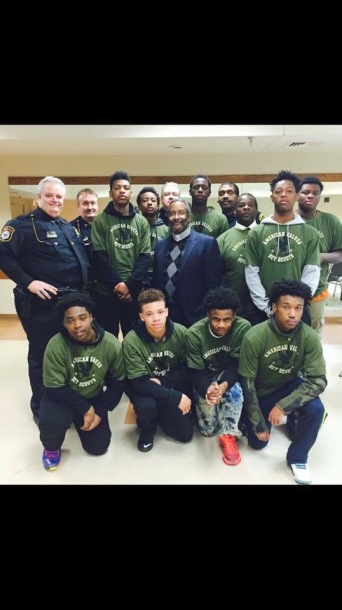 But the resolution isn’t merely about applauding their success.  There is more to be done!  Personally, I didn’t know of any congregations that still sponsored scouting units but Canon Jo Ann Hardy did.  Last year, the Rev. Ellis Clifton of St Clement’s, Inkster, worked with others in the community to establish a partnership between the City of Inkster and the Boy Scouts to foster life and leadership skills for the youth in their neighborhoods.  Here’s an article written in September, 2015, by Jacqueline Wright that appeared on the BSA Michigan Crossroads Council webpage:

On September 3rd, the City of Inkster and the Boy Scouts of America solidified a partnership to re-engage the community with our mission: to prepare young people for life. The cultivation breakfast took place at St. Clements’s Episcopal Church in Inkster, and was attended by prominent community leaders dedicated to making a difference.

Building a better relationship with community leaders allows the Boy Scouts the ability to introduce more kids in the Inkster community to our Boy Scout programming that focuses on character development, leadership skills, and helps to instill lifelong values.

No stranger to Boy Scouts, newly appointed Police Chief William Riley, who is also a Boy Scout Alumnus, understands the values the Boy Scout doctrine brings to the city and he believes this partnership will encourage more young people to become civically mined adults. The Rev. Ellis Clifton of St. Clement’s Church said, “Scouting will help save lives and be a catalyst for bringing fathers and sons together.”

We are looking forward to maximizing this partnership to its fullest potential as every child deserves to experience Scouting regardless of their economic condition.

And here’s a follow-up report published on their website in April, 2016:

Scouting teaches young men and women life skills that they can’t get anywhere. A bold statement, but a big impact. Aside from life-long friendships developed from peer to peer camaraderie, it is the preparedness for life that yields to be the greatest influence Scouting can bring to a young child. These character building attributes are what the Police Chief of Inkster, William Riley aspired to bring back to Inkster!

Boy Scouts of America has been absent from the city of Inkster for more than 30 years. But, for the past six months, Inkster’s Police Chief William Riley and newly-elected board member for Great Lakes Field Service Council has been laying the foundation to bring back the Scouting program. A program he believes positively shaped his early childhood and the youth in Selma, Alabama while he served as Police Chief prior to his current position. Engaging youth in their impressionable years will help to reduce the rising tension between the police department and the community it serves. We are proud to have Troop 1717 chartered by St Clement’s Episcopal Church as part of the Boy Scout organization that holds a Pack, Troop and Venturing crew!

I asked Rev. Clifton to tell me a bit about his experience with this endeavor and this is some of his reply: 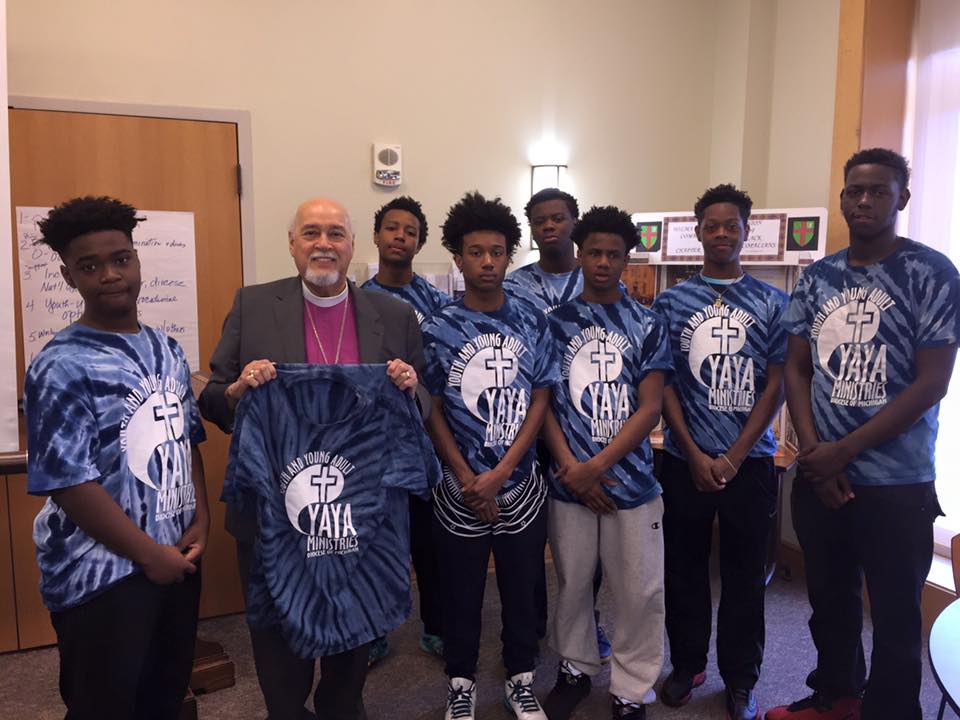 We started out recruiting for a Cub Scout pack and discovered that the older boys wanted scouting too.  The girls soon felt left out so now we have a CREW (female boy scouts) group too. This coming year, we hope to expand into the Westwood Public Schools to offer scouting activities at Daly, Thorne, and Tomlinson Schools, too.

The scouts made their public debut at a public safety forum co-sponsored by the Police Chief William Riley and our judge, the Honorable Sabrina Johnson.  Since then, our Boy Scouts have participated in 2 Inkster clean-up days (organized by Councilwoman Sandra Watley), distributed “get out to vote” information to the community, and helped to build the St. Clement’s float in the Memorial Day Parade (we won first prize!!).  Our Cub Scouts marched in that same parade.

We have somewhat incorporated the scouts into our RISE Initiative as the values promoted by scouting are compatible with those taught in the Rising Star Initiative (RISE), The Episcopal Church’s program designed to break the school-to-prison pipeline” by providing a wholesome, positive environment for learning.   (http://www.episcopalchurch.org/library/document/rising-stars-experience-rise-positive-alternative-school-prison-pipeline )  For that reason, seven of the scouts accompanied our representatives to the Mid-West Regional meeting of the Union of Black Episcopalians (UBE) in April 2016.  They were an outstanding presence and their participation was noteworthy.

Where we are now:

Twelve members of our Boy Scouts/Crew attended the week long residential camp from July 24th through July 30th.  This camping experience was held at the historic D-Bar-A Scout Ranch in Metamora, Michigan.  Some came back with merit badges for archery, sharp-shooting, as well as badges in other areas.  We have approximately 70 elementary school age children (both boys and girls) registered for the three-day summer day camp from August 16-18.  These camping experiences come from the vision of Police Chief Riley and are very similar to the scout/police/city/community collaboration he had while he was Chief of Police in Selma, Alabama.  Our efforts are a collaborative effort of the Scouting Council, the Inkster police, and St. Clement’s church.

Growing edges:  We have not had the adult volunteer response for which we had hoped. Recently, we met with the Mayor, the Honorable Byron Nolan, to discuss the possibility of getting other civic groups to assist with our efforts.   At our recent Summer Youth Explosion (another collaboration between St. Clement’s and Brothers and Sisters United), we were introduced to the adopt-a-grandparent organization that has expressed an interest in assisting with the Cub Scouts and Crew.  We desperately seek the involvement of the community so that this is not solely perceived as a St. Clement’s “thing” but rather a community effort to save our young people.

Hats off to Rev. Clifton and the fine, collaborative work the people of St Clement’s are doing with the community for the benefit of all their youth!!  I had the pleasure of speaking with Rev. Clifton as I prepared this post and heard the pride in his voice as he told me of one young scout who has successfully returned to school, another who has participated in the Mayor’s Youth Advisory Council and one more who, despite some learning challenges, regularly serves as an acolyte for St. Clement’s.

Sponsoring a scout troop is one way to respond to this resolution from General Convention and certainly within reach of most of our congregations but there are others, too.  Last July, the Boy Scouts Executive Committee voted to lift a ban on openly gay adults in scouting leadership (http://www.wsj.com/articles/boy-scouts-to-vote-on-ending-ban-on-gay-adults-1438016457 )  As one might expect, this controversial decision on their part was met with both support and criticism (much of it coming from religious organizations that sponsor scout troops).  We must continue to speak out in support of full-inclusion without discrimination so that all youth and adults can experience the benefits of the scouting experience.

A Prayer for Young Persons

God our Father, you see your children growing up in an unsteady and confusing world: Show them that your ways give more life than ways of the world and following you is better than chasing after selfish goals. Help them to take failure not as a measure of their worth, but as a chance for a new start. Give them strength to hold their faith in you, and to keep alive their joy in your creation; through Jesus Christ our Lord. Amen

(from Rising Stars Experience, a Rites of Passage Initiative for Young People http://www.episcopalchurch.org/files/rise_rising_stars_experience.pdf )