Last week it seemed as though I had only left Salt Lake City moments before I wrote the blog; this week it seems like I’ve been home for ages.  Funny how the everyday stuff of 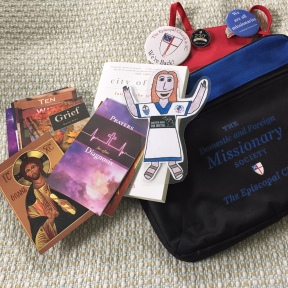 life – sermon preparation, cooking, cleaning, and gardening, to mention a few things – can become the focus of one’s day even right after an event as significant as General Convention.  I’m home, I guess, although I still have many mementoes awaiting their permanent homes that are daily reminders of my experience (that just means I haven’t put everything away yet!).

While we were at Convention, the world didn’t stop.  Right before we left for Utah, nine people were murdered in their AME church.  In the first week of Convention, SCOTUS ruled to keep the subsidies required for millions of people to keep their health care coverage – and then they approved the rights of all to marry.  A little further away, the Dominican Republic prepared to force the deportation of individuals born in the that country but of Haitian descent who do not have permanent legal status despite living all their lives in the Dominican Republic.

Until 2010, most people born in the Dominican Republic were guaranteed citizenship but a 2013 court case removed the provision of jus soli from the constitution, applying the new ruling retroactively to include anyone born after 1929.  It is estimated that there are 450,000 Haitian migrants and many thousands of Dominicans of Haitian descent currently living in the Dominican Republic.  While an amnesty program allowed for registration for these people after 2013, poor organization of the governmental structure and lack of appropriate documentation by the individuals prevented the majority from completing the requirements.  Fortunately, pressure from other nations has temporarily stopped the planned deportation.  Good news, indeed.

At General Convention, we addressed two resolutions specifically related to this issue – D053 and D058:

Resolved, the House of _______ concurring, That the 78th General Convention, meeting in Salt Lake City, Utah, June 24-July 3, urge the government of the Dominican Republic, in the exercise of its national rights to govern immigration and emigration and to determine citizenship status, to respect the dignity and humanity of those persons who are expelled from the Dominican Republic; and be it further

Resolved, That the Executive Council and the appropriate bodies of the General Convention or Executive Council are requested to monitor events related to the expulsion of Haitians or persons of Haitian decent and the refugee concerns that result from such expulsion and determine ways by which The Episcopal Church can support those who suffer in this process.

Resolved, the House of Deputies concurring, That the 78th General Convention condemn the ruling, and its enforcement, of the Dominican Republic’s constitutional court on September 23, 2013, which ruled ineligible for citizenship any children born of Haitian migrants in the Dominican Republic and ordered authorities to audit all of the nation’s birth records back to June 1929 to determine who no longer qualifies for citizenship, thereby making such persons effectively stateless with an estimated hundreds of thousands of persons being made stateless retroactively and ineligible to obtain a birth certificate, attend school, work, drive, open bank accounts, receive state health insurance and pensions, get baptized, or get married; and be it further

Resolved, That all Episcopalians pray for Dominicans of Haitian descent and all other stateless persons in the world that they may find homes where they are welcomed and afforded legitimate residential, educational, work status, and legal documentation of their personhood for themselves and their children; and be it further

Resolved, That the Convention direct the Office of Government Relations to communicate to the United States government, to the United Nations, and to our ecumenical and interreligious partners to protest this human rights issue with the Dominican Republic on behalf of Dominicans of Haitian descent and others similarly affected by this issue.

We know that our friend, Bishop Julio Cesar Holguín of the Episcopal Diocese of the Dominican Republic, is doing everything he can to prevent this injustice and we are aware that he lives in a sensitive situation so we continue to pray for his safety as the government determines its next move.

You can find a link to the full article from ENS here – http://episcopaldigitalnetwork.com/ens/2015/07/15/convention-further-strengthens-churchs-position-on-immigration-refugees/

Other resolutions addressing the status of immigrant populations were also adopted:

The International Anglican Family Network has a campaign to end statelessness by supporting universal birth certification in all those countries that support the 1989 Convention on the Rights of the Child.  Their website affirms: “A name and nationality is every child’s right, enshrined in the Convention on the Rights of the Child and other international treaties. Nevertheless, the births of nearly 230 million children under the age of five have never been registered. IAFN considers that birth registration is a Gospel issue since under-registration marginalizes millions of children and adults, excluding them from the benefits and protection of citizenship. IAFN is therefore promoting the role of churches in raising awareness and helping families to overcome obstacles to birth registration.”- http://iafn.anglicancommunion.org/  And you can find many helpful resources for your congregation at this link – http://iafn.anglicancommunion.org/resources.aspx#1

Speaking out for the protections of those whose voices are not heard has made a difference, at least for now, for the people of the Dominican Republic but the job is not over.  Stay informed.  Share your concerns with your legislators.  The work of General Convention is not done; it’s only just beginning!

You know us completely.

You watch over our going out and our coming in.

You even count all the hairs of our head.

You are the place of our belonging.

How wonderful it is to know we are your children

Hear our prayer for your people.

Wherever anyone is not identified as citizens in

the land of their birth

strengthen our determination to make sure they are

not hidden, but visible and valued

not forgotten but remembered and lifted up

by the strong arms of societies that know how to

In the name of the One who welcomed all

and blessed them. Amen.