For those of you who check out our Nuts and Bolts Blog Facebook page, you may have read one of these articles already but I thought that the message is worth repeating for those of us who wonder whether our attention to these resolutions makes any difference at all.  Two weeks ago I wrote the blog about Bishop Katharine’s call for prayer to end the violence in South Sudan.  I recently learned that a ceasefire was signed on January 23, 2014, between the Republic of South Sudan and the South Sudan Democratic Movement.   In addition to this great news, our day of prayer has touched the lives of Sudanese immigrants in the United States.  As an individual, I often feel pretty powerless to effect change but the following articles are great examples of just what can happen when we commit together to love our neighbors.

For the congregation of St John the Divine Episcopal Church in Moorhead, Minnesota, this observance took on a personal nature since the congregation is primarily made up of Sudanese refugees.  While they were certainly praying for peace in 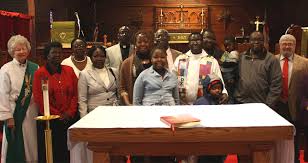 their former homeland, their prayers were also for the many family members they had left behind.   The Episcopal New Service reported: “Many wiped away tears as their vicar, the Rev. Michael Kiju Paul, himself a Sudanese refugee, prayed ‘Father, save South Sudan!’”  Pastor Paul responded in an interview following the service: “I want to thank the presiding bishop for designating this day as a Day of Prayer for South Sudan. It means a lot to me and it means a lot to the Sudanese people here. We are badly hit and affected by what is happening back home. We weep for our country and the Americans here in our midst weep with us. The hearts of the members of this congregation are torn apart by what is happening back there.”

A vestry member at St John’s, Albert Simbe, had fled Sudan with his late wife in 1998.  Speaking of the Day of Prayer, he said:  “I really feel grateful that people in the United States are thinking about the suffering people in South Sudan. What broke out there on Dec. 15 is terrible, with thousands of people killed, displaced and suffering with no food, no water, no essential commodities. I am praying very hard that the peace talks in Addis Ababa will succeed. If they do not, as one rebel leader said, the country will crumble.”

The full report may be found at this link: http://episcopaldigitalnetwork.com/ens/2014/02/19/day-of-prayer-is-emotional-experience-for-sudanese-congregation/

The Rt. Rev. Terry White also led the Episcopal Diocese of Kentucky in a Day of Prayer for South Sudan at Messiah-Trinity Church in Louisville.  This blended Episcopal-Lutheran parish became home to a significant Sudanese 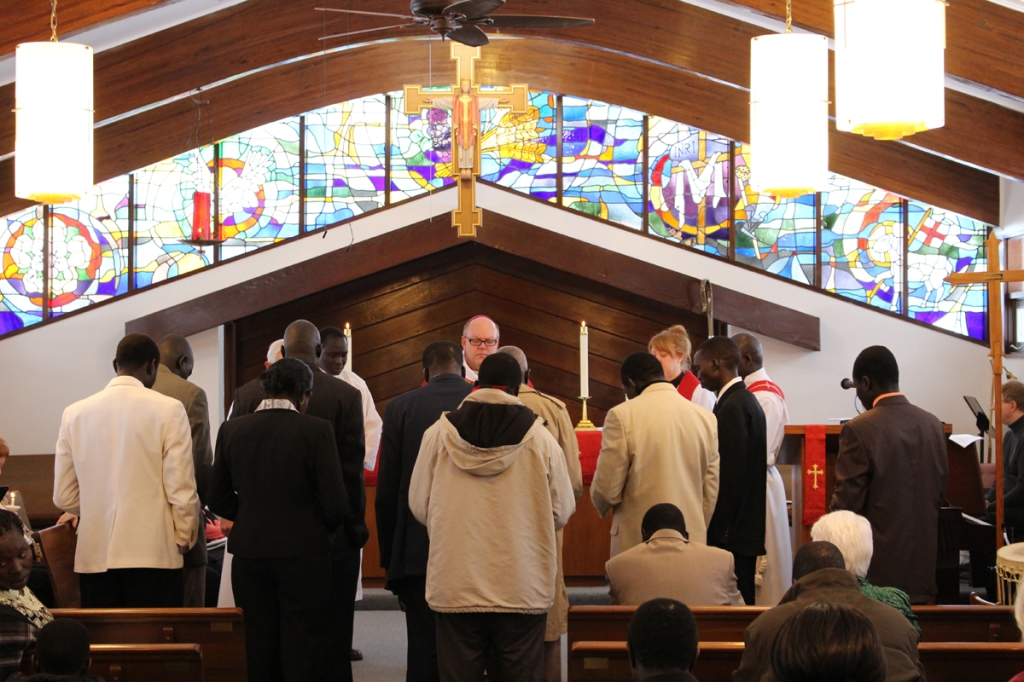 population after some 200 “Lost Boys” arrived from Sudan in 2001.  A report from the Episcopal News Service states: “White called the diocese to the Day of Prayer as a show of solidarity and support for its Sudanese members after hearing “sad and sobering” reports from Deacon Daniel Kuol, who serves at Messiah-Trinity. Kuol and his wife, Deborah, have lost seven family members in the fighting in and around Bor, the birthplace of many of Louisville’s Sudanese population.”  The service at Messiah-Trinity included scripture readings in both English and Dink and Bishop White’s sermon was available in Arabic as well.  After the service, the congregation shared a pot luck meal of traditional Sudanese foods and a time of story-telling from their homeland.

Here’s the link to the full article: http://episcopaldigitalnetwork.com/ens/2014/02/19/prayers-support-for-south-sudan-shared-in-kentucky-diocese/

You and I may not know any Sudanese and their country may seem far away and out of sight to us here but reading these reports reminds us that our neighbors may not be next door and yet the call to love is not determined by miles.  Becoming informed, welcoming strangers, stretching our experience and being faithful in prayer are all ways that we demonstrate our commitment to follow Jesus.  Bishop Katharine’s call to prayer may have been for February 16th but the need is still great and the prayers are still important.  Please join me in bringing our prayers for peace in South Sudan before our all-loving God.

What is the What? The Autobiography of Valentino Achek Deng by Dave Eggers

The Journey of the Lost Boys: A Story of Courage, Faith and the Sheer Determination to Survive by a Group of Young Boys Called “The Lost Boys of Sudan” by Joan Hecht  http://www.amazon.com/The-Journey-Lost-Boys-Determination/dp/0976387506/ref=cm_lmf_tit_3

Eternal God, in whose perfect kingdom no sword is drawn but the sword of righteousness, no strength known but the strength of love: So mightily spread abroad your Spirit, that all peoples may be gathered under the banner of the Prince of Peace, as children of one Father.  We ask that your gospel of peace be spread over the land of South Sudan, that violence would cease and that healing might begin.  We ask for comfort and grace for all those who have lost loved ones in this conflict.  And, we ask that you strengthen our brothers and sisters in the church of South Sudan that they have grace to carry on the work of reconciliation.  Finally, dear Lord, we pray that love might prevail.  All this we ask in the name of Jesus Christ, our Lord.  Amen.